In order to overcome Maximum Acceptable Stem Torque (MAST) issues, Imtex Controls says many of its customers are adopting the Camtorc actuator design. Here the company explains why…

The demands for safety, efficiency and environmental responsibility from the oil, gas and energy industries have impacted the selection of pneumatic valve actuators for quarter turn failsafe valves (ball, butterfly and plug) and dampers.

When sizing pneumatic actuators for fail-safe valves, torque safety factors can vary depending on project specifications. Valve torques can also vary from break to open and running end to close positions. 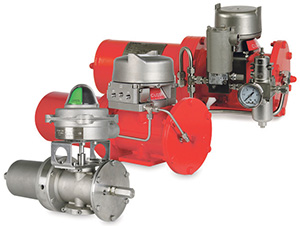 End users normally determine the valve safety factor during the design stage so valve manufacturers do not need to add extra contingencies. Generally, these safety margins are determined with the goal that the valve should operate smoothly throughout its service life, irrespective of the process condition.

For example, in the oil and gas industry, three different application categories for safety margin are commonly designed for the on/off actuator valves:

Many valve producers are able to offer higher tensile strength stem materials for large ball and plug valves, which are used in many shut down applications in order to raise the MAST values. However, this is not true for smaller ball valves (up to 50mm bore) when it can be challenging to source the stem material to take care of 200% or 250% safety factor requirements because of the limitations in the physical size or valve design.

In many applications where space limitation and structural load are a concern i.e. offshore drilling platforms, FPSOs etc., many customers will use triple offset and/or high performance butterfly valves instead of ball and plug valves. However, in larger bore sizes, the smaller dimensions of these valves when compared with ball and plug valves results in stem sizes that are often smaller and weaker.

The most commonly used actuators for automating on/off 90° valves utilise either the well proven rack and pinion or scotch yoke mechanisms.

The rack and pinion type gives constant torque output throughout the stroke and is used for smaller sized valves.

The scotch yoke type is effective for larger valves where a higher torque requirement is needed at the beginning of the stroke.

In the energy related industries, the scotch-yoke system is often preferred. However, due to the inherent design and torque curve characteristics of the design, it is not always the best choice when using spring return versions for fail safe applications where there are valve MAST issues to consider.

For the spring direction of any pneumatic actuator, the spring size has to be large enough to ensure the end of the spring torque closes the valve with the specified safety margin built in.

With a conventional scotch-yoke actuator, the air side is not independent of the spring side. This means that during the air stroke, the actuator air cylinder not only has to be a large enough diameter to produce sufficient torque with the specified safety margin to break the valve from its seat, but it also has to overcome the spring force which increases as it moves from 0° (spring extended) position to 90° (spring compressed) position.

The result is a dimensionally large scotch-yoke actuator, producing high break torques resulting in the maximum torque output from the actuator reaching or even exceeding the valve MAST value.

The mathematically derived cam profile maintains a constant Moment Arm throughout the actuator stroke. This ensures a constant torque output is achieved for the full 90° travel of the actuator.
The self-contained spring module operates independently from the cam mechanism during the air stroke. This is achieved using a secondary air piston sized solely to compress the spring. Thus, unlike many other spring return actuators where the torque is significantly reduced compared to its double acting version, the cam actuator has the same constant torque output for both double acting and spring return versions.

An added benefit is that the Camtorc actuator is physically smaller than the comparable spring return scotch yoke actuator, allowing for space savings to be achieved across the plant and in turn less infrastructure and cost.