Dragon Drilling are a local company who are now the largest environmental drilling company in the UK. They specialise in installing water and ground source heating boreholes for all domestic and commercial applications from private home owners, farmers, holiday parks, social housing companies as well as self-builders and large building companies. 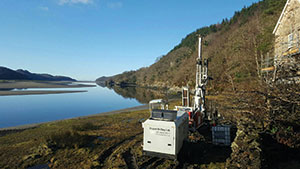 Chairman Geoff Ellison explained, “This year’s drought has brought an unprecedented number of calls from all over the UK from people and organisations who need their own private water supply. Many calls were from people who had previously considered having a borehole to replace their well, spring or other private water supply but limped through the season and not had the issues with no water that they were suddenly faced with this year.”

“We also had calls from private individuals and businesses who have decided that they need to look ahead and harness their own resources. High water users such as dairy farmers are increasingly eager to have their own supply.

Being pro-active rather than reactive is definitely the way forward for those who have an unreliable water supply. Grants for farmers have been available via the Farm Connect Grant on the Welsh Government Website and a number of farmers have made use of that funding in recently completed projects.”

Heating your property is also something that Dragon can help with. They drill boreholes for Ground Source Heating – a renewable energy with an excellent payback from the Government’s Renewable Heat Incentive (RHI) for both domestic and commercial applications.

“Ground Source Heating is not as popular as biomass, solar or wind power but is an increasingly used replacement system when homes and businesses are looking to divert away from fossil fuels. It is a sustainable use of the earth’s natural resources which can provide heating as well as cooling for buildings,” explains Andrea Ellison, one of Dragons Directors and also an executive officer of the industries’ trade body, the Ground Source Heat Pump Association. 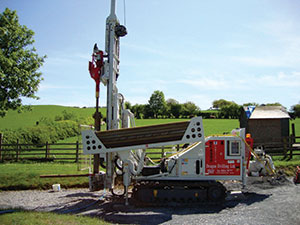 “A few metres below the ground’s surface, the temperature is constant (approximately 110°C) all year round. A ground source borehole makes use of the earth’s constant temperature using a heat pump which converts and transfers energy for hot water and heating using radiators or under floor heating systems. There is no need for large amounts of land as each borehole is only about 6 inches in diameter.

The cost of installing a ground source heating system is variable but in most cases the RHI should reimburse that initial financial outlay. Ground source heating systems work most efficiently when used in under floor systems, this makes installation in new build properties particularly attractive. However, ground source heat pumps can also be used in existing properties using radiators or retro-fitted beneath the floor or even in the wall. Continued growth has resulted in Dragon expanding their office facilities at their Graig Lelo site near Corwen, to cater for new members of staff, which now number over 30. They continue to sponsor and support local organisations such as Ruthin Town Football Club, Bala Rugby Club and the Mill Nursery.

For more information call Dragon Drilling (Water & Energy) Ltd on 01824 707777 or visit their website at www.dragondrilling.co.uk or visit our stand at the Flint & Denbigh Show.