Getting back towards some normality is happening – but to bring those machines back into production after several months can also be a challenge in itself. This is the moment that the equipment can show up problems either during start up from that long overdue maintenance overhaul – the last thing one needs is added expense but this can be a good opportunity to check those screws and barrels.

Screw and Barrel wear has been previously highlighted by many experts within the plastics industry such as Jim Frankland, Tim Womer, Imrich Klein and others, for eg (www.ptonline.com) but it is worth revisiting.

Whether it is extrusion, injection moulding or blow moulding, these presses work best when running and when optimum settings are reached. However, all processes use the Archimedes screw principle where the helical flight arrangement pushes the material from the feed zone, through the transition zone, then the metering zone, past the nozzle into the mould cavity or for extrusion, the die head. Forcing the material in this way on a rotating screw, through a barrel is extremely efficient – the basic design remains today. While heater bands provide the heat, up to 90% of the actual heat is generated in the melting process between the screw and barrel.

For most materials such as HDPE, PS, PP or LDPE used without glass fill, Nitride hardened surfaces work extremely well but where GF is added or for eg, metal powder with acetal then the material can be harsh. Using bi-metallic hardened surfaces containing boron, nickel, chromium, etc is typically used but even this does not necessarily stop surface scoring, uneven wear or possibly cracks occurring. And while surface wear does indeed occur within the high pressure areas such as the transition zone, the feed zone should also be checked.

Add additional factors such as high pressure, viscosity of the polymer, screw speed, barrel alignment to the gearbox and screw and barrel alignment itself – can all contribute to accelerated screw and barrel wear. The lubricating effect of the polymer can have an effect especially when containing harder material. For example 40% or 50% of glass fill (GF), often used in polyamide (Nylon) is commonly used. This raises the chance of build-up of solid uncompressed material which causes high uneven pressure on the screw, leading to deflection and in turn, contributes to metal to metal contact between the screw and barrel wall.

Plastics production is typically high volume/low unit cost, so the tendency is to keep machines in operation. With machines running regularly, screw and barrel wear is not immediately apparent because machine speed, pressure or even adjusting the material mix is often attempted first to correct melt-quality issues. But over time as the gap between the screw and barrel increases, the melt-film can form, become thicker and get hotter leading to loss of melt quality in output. For a continuous process such as extrusion, this will be particularly apparent not least because the melt in this continuous process is likely to move backward across the screw flights instead of forward. 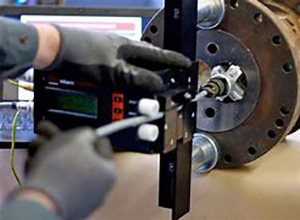 Measurement of a twin extruder barrel is shown here

Monitoring screw and barrel wear in-house should be part of regular maintenance. Any issues or early signs can be picked up and scheduled in by the maintenance team. Measuring instruments such as portable electronic bore gauges can be fitted with extension rods to enable measurement along the interior of the barrel. Screws flights can be measured by digital micrometers with accuracy up to 0.001 but a visual check can reveal much information but it is advisable to clean both screw and barrel whilst still hot using a gauze or wire brush to remove remaining material before cleaning further as it cools.

Analogue gauges can do the job but electronic bore gauges can provide measurement readouts direct to a computer where the data can be logged and printed.

However, it is wise to consult your OEM or specialist screw and barrel manufacturer. For example at Magog Industries, engineers can measure accurately both the screw and barrel for drawings and to produce an inspection report with recommendation for repair, replacement or re-design. In addition, advice can be provided regarding coatings such as Chrome, Armoloy (hardened chrome that can be coated over nitride), Hastelloy or Ceramic. Especially for demanding blown film extrusion processes within packaging, medical and pharmaceuticals.

To replace or repair?
Often, it’s not easy to tell and the best approach is to have screw and barrel specialist inspect and advise accordingly either by arranging an engineer visit on site or to send the worn items to the OEM or specialist. Refurbishment and/or repair is a cost effective method: Depending on the condition it is possible to rebuild flights, grind and polish a screw 3-4 times during its lifetime but not recommended beyond that. 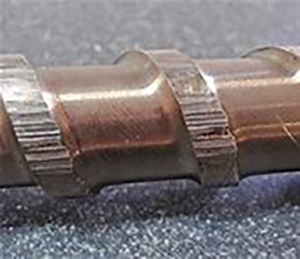 However, when a screw is worn beyond a certain point, problems in production become apparent as much of the melted material ‘slippage’ moves backward over the worn flights: material is wasted but the need to increase pressure, in turn increases power consumption and efficiency. A 10% decrease in an injection screw OD can produce 25% less output (source: Anderson, R. Flite Technology, USA).

Injection barrels are thicker walled compared to extrusion to cope with on/off clamp forces and can be re-bored and re-sleeved in the worn section (usually at the feed end) to be completely serviceable again.

Extruder barrels being far longer but thinner walled pose a different problem in that re-sleeving is likely to be along the full length – an expensive option, hence a new barrel is the better option and more cost-effective.

If a throughput test on an extruder shows a capacity reduction of 15% or more, the screw and barrel will have significant wear and will need attention.

Machine manufacturers such as Milacron, Battenfeld and Krauss Maffei offer advice and guidance, for example a throughput test as recommended by Milacron is as follows:

Be sure to obtain the manufacturer’s data regarding maximum throughput for your machine such as for screw dia, drive size/HP and max screw speed (rpm). 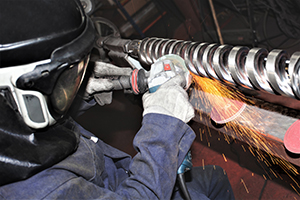 For example, a single screw extruder with 100 HP drive, using a 90mm general purpose screw at 135 rpm for 60 seconds has produced 3.8kg x 60 (1hour) = 228kg compare this with max output of 272kg provided by the manufacturer, leaves a shortfall of 44kg, that is around 16% reduction in throughput capacity. But with further calculation on what should be the optimum energy cost for a given machine, a 16% loss in output plus the increase in power to compensate production, this is likely to significant over a 12 month period.

There is no definitive standard price electricity cost in the UK as the per kW/h rate varies from 12p to 18p but nonetheless, extra cost on power consumption alone could be as much as £3,500.00 not including added costs of other machine parts such as the gearbox, cost of wasted material and loss of production time, not to mention quality issues particularly critical within the medical sector.

To conclude…
Regular monitoring and even visual check of screws and barrels makes sense. But within a busy production environment this is not always possible and the old adage, “If it ain’t broke, don’t fix it” is understandable. That said, screws and barrels do wear over time and for the most part, repair and/or refurbishment offers a cheaper alternative to new and usually in less time, typically 4-5 weeks turnaround.

But new screws and barrels from specialists such as Magog Industries are good value, made to OEM standard and because the focus is on screw and barrel engineering rather than machinery and ancillaries, delivery times are shorter. Further details can be viewed at: www.magog.co.uk

For all sectors but especially in continuous production, it is important to keep machine screws and barrels high on the maintenance (and quality) agenda to ensure consistent output, less downtime, less material waste, less stress on other machine parts – its not just about reducing energy consumption.